Sometimes you have to dig a little deeper…

Our experiences in life teach us our best lessons; how we interpret those lessons are critical to our happiness and success in life.  The story of the Seven Jars is a great example of one of life’s important lessons, and we are happy to share it with all who care to listen.

It began during Prohibition… a time very different from which we now live. Frank Ratcliffe, a dapper and handsome young man with a quick smile, recognized a need within the community and sought to fill it. (Okay, let’s face it: he was a bootlegger).  Frank delivered beverages that were in high demand, sort of an early version of FedEx. BUT the challenges were very different than delivery services of today; using highly modified Ford Model A cars, a typical delivery often wound through city streets and country roads with at least one law enforcement vehicle in hot pursuit.

In passing the 18th Amendment to the Constitution, America had made an aggressive decision; in order to combat the evils of alcohol (per capita consumption was reportedly over 10 times that of today), the Volstead Act prohibited the production, importation and distribution of alcoholic beverages.

Many versions of alcoholic beverages were available during prohibition. “Bathtub Gin” became popular, and not many people realize that it was legal to make up to 200 gallons of wine at home during that time (and it still is legal today!)  “Moonshine”, or spirits distilled mostly from corn in hidden stills located deep in obscure locations, became popular as the commercial production of whiskey ceased.  Ever the one to meet the needs of the community, Frank became an expert in all types of alcoholic beverages, from homemade wines to moonshine to different versions of classic distilled spirits. When the 18th Amendment was repealed in 1933, North Carolina remained a “dry” state.
The major distilleries reopened and began ramping up production, but since it was not legal to sell in North Carolina, Frank found demand for his services actually increased.  The difference was that now the “product” was “tax paid liquor” – name brand spirits produced legally and taxed by the Federal government, just not available in North Carolina.  Frank purchased his inventory in states like Florida and even Northeastern states like New York or Connecticut, and transported them to Charlotte in disguised shipments on tractor trailer trucks.  The liquor was warehoused in Charlotte, and delivered to “liquor houses” in modified Model A Fords.  In 1937, North Carolina enacted an Alcoholic Beverage Control bill that began the process for legalizing alcoholic beverages in counties that elected to do so.
As state controlled “ABC Stores” proliferated, Frank ceased his delivery business and settled into a more traditional role in a related business by opening a nightclub in downtown Charlotte.  Initially known as the “Friendly City Club”, it was located at 110 West 6th Street, and featured live entertainment and some of the best food in the state.  The Friendly City Club was renamed The Flamingo Club in late 1949, and it became a fixture of Charlotte nightlife.  A particularly unique aspect of the operation was the casino on the second floor, where one could find a robust craps game or blackjack tables with friendly dealers to entertain visitors. (Okay, so that wasn’t legal either…) 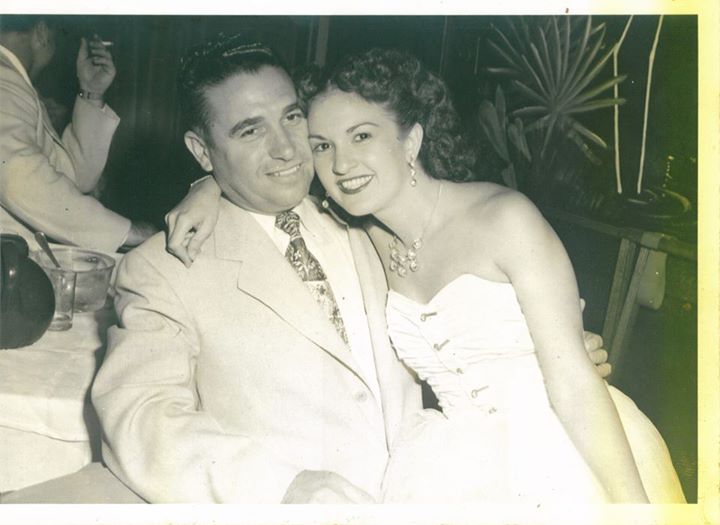 However, it was in the Flamingo Club where Frank’s life took a dramatic turn.  In his effort to provide first class talent for the guests of the club, he booked a young singer named Velma Corey, known as “the little lady with the huge voice”.  Although he hired her for a two week performance, the minute Frank laid eyes on Velma he decided he would never let her get away.  After five weeks they were married, and Frank turned his focus to business operations that were more in keeping for a husband, father and family man. 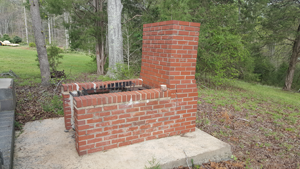 This isn’t the real one–that one is long gone. But this is an exact copy of the brick barbeque grill where the jars were buried.
Frank and Velma lived a wonderful life for the next 27 years. Unfortunately, he passed away suddenly in 1977.  A couple of years after his death, Velma went to her son Del, who at the time was still living with her at their home near UNCC.  The main family business was a golf course that Frank had built and was known as Paradise Valley Golf Course.  She told Del that “Daddy had buried something on the property, and we need to find it.”  Knowing the stories about his father’s past only added to the mystery as she insisted that they dig for “it” at night.  At 2 AM on a warm summer night, while his mother held the flashlight, Del dug where his mother told him – 4 bricks in, and 3 steps out from the corner of the family brick barbeque.  After about 20 minutes of digging, Velma became nervous and insisted that they stop digging – and cover up any signs that they had been out that night.  Over the course of the next couple of years, she would get up her nerve and decide to look in a different place.  Frank’s “secret” remained buried.
In 1984, the property was sold.  Two weeks before the closing, Del decided that the suspense was too much – he had to find the buried secret.  The only way to do that was to dig deeper… he told his mother that he intended to use a crawler loader to dig until he found what his father had left.  She agreed to let him do it under one condition:  it had to be done at night, under the cover of darkness.  SO, once again, at 2:00 AM, they set out digging.  This time, rather than a shovel, a 1 yard bucket on heavy equipment would do the work.  As Del operated the loader, Velma directed him on where to dig with a flashlight.  The loader strained as the bucket entered the ground for the first time.  As the bucket lifted from the earth, Del could see the flashlight suddenly waving frantically back and forth; the secret had been found.  In the rich soil of Mecklenburg County they found seven mason jars, covered in aluminum foil.  They held Frank’s legacy –recipes and knowledge he had gleaned from years of “meeting the needs” of his customers and friends.

This isn’t the real one–that one is long gone. But this is an exact copy of the brick barbeque grill where the jars were buried.

The Final Chapter & Lesson of the Seven Jars

The contents of the Seven Jars, like much of Frank’s history, remained a secret for many years.  Almost 30 years after their discovery, and almost 40 years after Frank’s passing, his belief that “small” distillery businesses would be allowed to operate legally came to pass.  Seeing the opportunity to share the unique family history with the world, Velma’s kids convinced her to not only begin telling their story, but to begin the process of getting a distillery licensed and operating in Mecklenburg County.  Velma went to join Frank in August of 2013 before the distillery was finished, but not before she made sure Frank’s vision would be a reality.  The essence of our legacy is a love story, and one that is rare in today’s world.  Frank and Velma met and it was truly love at first sight.  They were married until he died, 27 years later.  Velma remained forever in love for the next 36 years, working to take care of their children, to make sure that the family they started was prosperous and happy.  And although he was not physically with her, Velma always knew that Frank was at her side.  Today they are together again. 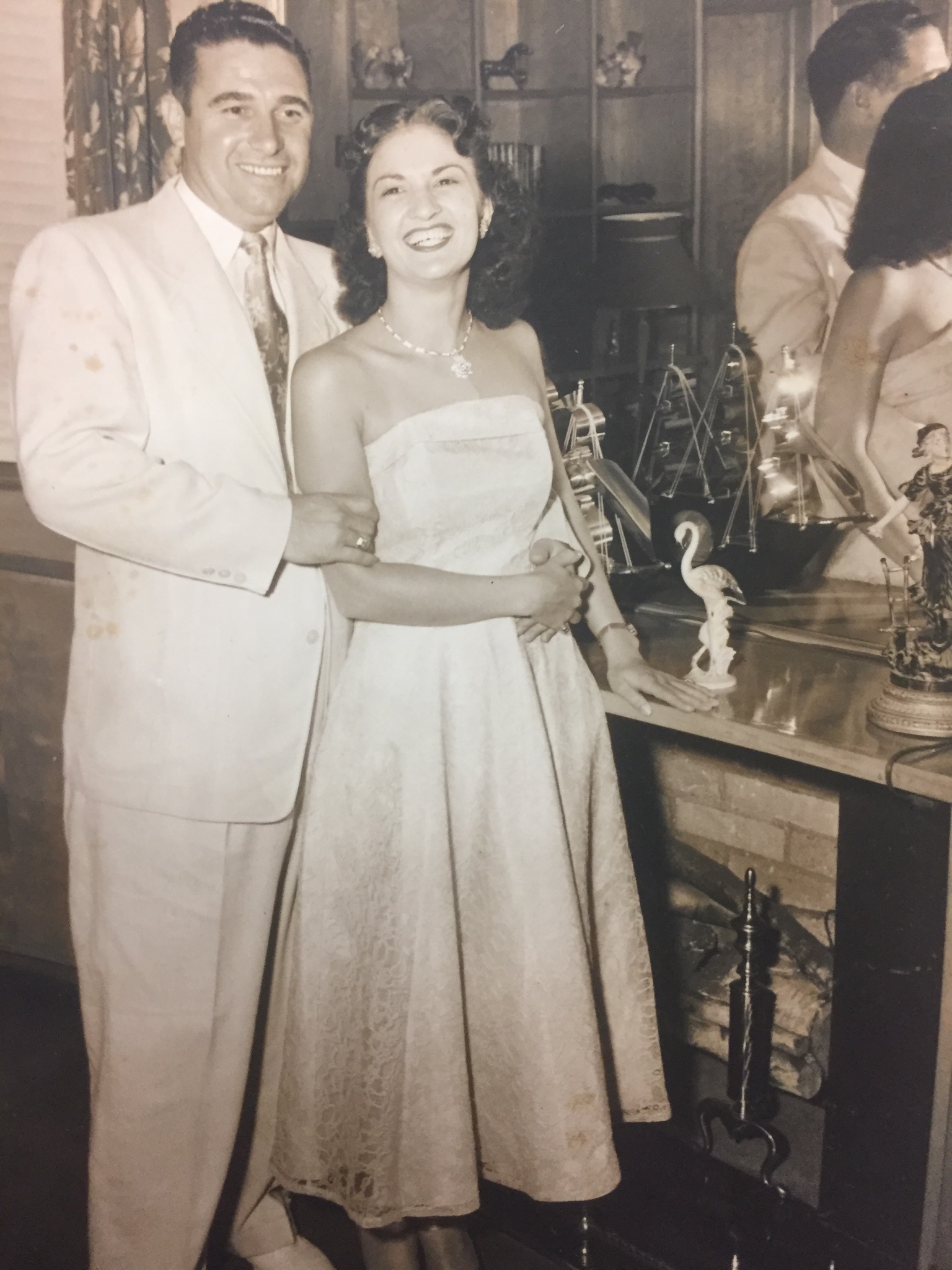 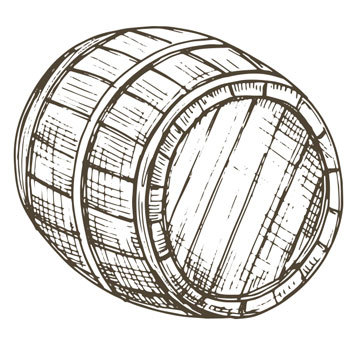 So now you know why we call our business “Seven Jars”.  Although it is not widely known, wine, beer and spirituous liquors are all intertwined with the history of Charlotte.  The products and services we provide reflect that history.  We are certain that Frank and Velma would absolutely love the Seven Jars Distillery we have today.  We know that they would love for you to visit, see the many things we have from their story while you sample our beer, wine or spirits.  We would love that too – so please make plans to visit. 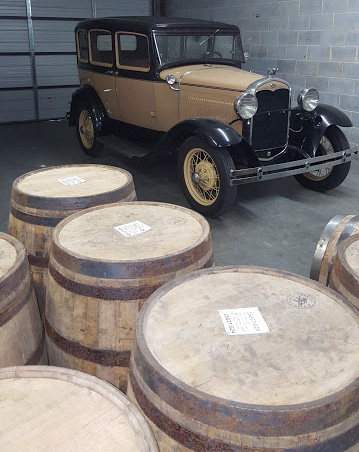 The Seven Jars 1931 Model A Ford is exactly like the cars Frank used over 80 years ago on the streets of Charlotte.

So now you know why we call our business “Seven Jars”.  Although it is not widely known, wine, beer and spirituous liquors are all intertwined with the history of Charlotte.  The products and services we provide reflect that history.  We are certain that Frank and Velma would absolutely love the Seven Jars Distillery we have today.  We know that they would love for you to visit, see the many things we have from their story while you sample our beer, wine or spirits.  We would love that too – so please make plans to visit.

The Seven Jars 1931 Model A Ford is exactly like the cars Frank used over 80 years ago on the streets of Charlotte.

… by the way. That lesson we learned from this experience? The best things in life are rarely easy to get. You have to make the effort, keep trying after you fail, try again…and again. NEVER give up.

Sometimes… You Have To Dig A Little Deeper.